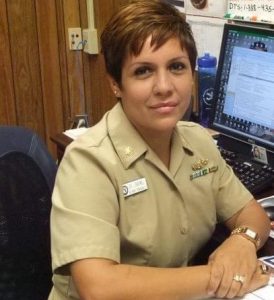 Lucia Brightwell while serving in the U.S. Navy

This month, VMSI is excited to honor Lucia Brightwell for our April VetSpot! Lucia has been with VMSI since 2016 and currently provides Senior Program Management Support to the Department of Veterans Affairs.

Lucia was the first female officer onboard a Navy Destroyer and the first female Engineering Officer onboard the USS John F. Kennedy aircraft carrier. While onboard the aircraft carrier, she attended Fleet Week in New York for OPSAIL 2000 and had the opportunity to meet former President Bill Clinton and former First Lady Hillary Clinton. During this event, she also got to enjoy the NYC 4th of July fireworks from the carrier as it was anchored in the Hudson River.

Lucia recommends these tips for anyone transitioning into civilian life:

Thank you for your service, Lucia, and for sharing your experiences with the #VMSIFamily!