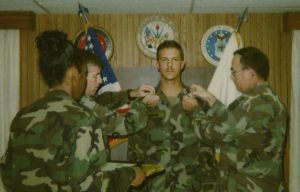 Darin Smith being promoted to sergeant
in the U.S. Army

Our employees are what make us valuable and, as a Service-Disabled Veteran-Owned Small Business, VMSI is proud to honor our veteran employees by highlighting their service and VMSI employment.  This month, VMSI is excited to honor Darin Smith for our Veteran Spotlight! Darin has been with VMSI since 2019 and provides contracting support to VA Network Contracting Office (NCO) 7 and the Tuskegee VA Medical Center.

Darin chose to go into the service for the chance to travel and gain some life experience. His father and two brothers served in the Army and his grandfather fought in the Philippines during World War II, so military service was clearly a family affair. Looking back now, Darin believes he would have been career military if he had explored the many opportunities the military provides its servicemembers. Darin enjoyed the way people from all walks of life and areas of the country could put aside the things that made us different and unite around one mission.

While in the military, Darin was an Accounting Specialist (73D) while stationed at the 500th Military Intelligence Brigade in Japan. When he was assigned to the U.S. Disciplinary Barracks at Ft. Leavenworth, the Accounting Department was staffed with civilians, so he was moved to the S-3 Training office and eventually the S-1 Personnel office, where he crosstrained in those positions.

As far as memorable experiences go, Darin had quite a few during his time stationed in Japan. He climbed Mt. Fuji and stayed overnight in a mountain hut.  However, upon his descent, he took a wrong turn on the trail and ended up three hours away from his tour bus. He also had a collateral duty as a member of the U. S. Army Color Guard in Japan and was joined on a flight by the 1990 Miss USA and her court.  They posed for pictures and signed autographs when they landed.

Darin recommends these tips for anyone transitioning into civilian life:

Thank you for your service, Darin, and for sharing your experiences with the #VMSIFamily!